IF is a hybrid genre. As an author, you want the player to read your text - you know, like a literature - but you have to make it interactive, so the player won’t become bored. I think the game writing is much closer to a movie writing, because you have to constantly switch between the “scenes”, splitting your game into small chunks.

So I’ve compiled a list of all the interactivity flavours of IF you can use.

Despite a popular belief, an IF style doesn’t matter much. This list stays almost the same for hyperlink1 and parser games. You’ll see some small differences, of course, but one can generalize this even for all the adventure games.

1: Menu games, hyperlink games, or CYOA-style games are text games where you use mouse (to click text links). The terminology is confusing because, for example, IfWiki describes CYOA as a gameplay style, not an interface one. I’ll refer to the interface style as “hyperlink” from now on.

So, what can you spice up a game with?

Also known as “guess the verb”. The player has all the things he needs. His goal is to understand what to do with them.

In a parser style this can be a truly hardcore experience, even when the game provides the player with verb suggestions. There are also ways to do it without a keyboard. 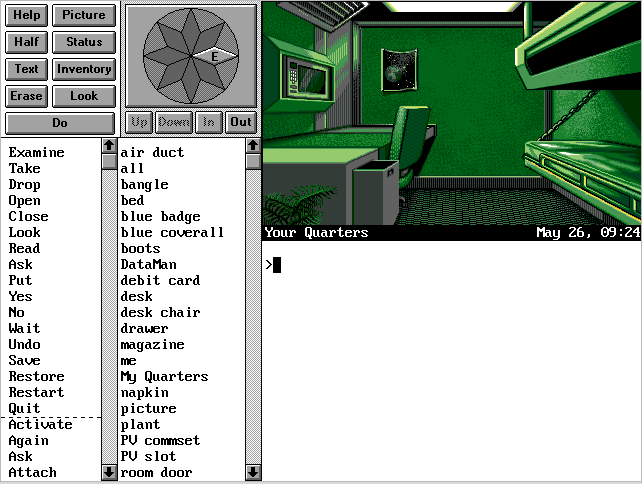 Of course, Legend’s games are a past thing so the only engine that lets you do it with hyperlinks is INSTEAD with proxymenu module.

A simplification of this is an inventory management puzzle. The player knows all the verbs, he has all the objects, now he needs to do something with them.

The hyperlink games usually simplify it even further, taking out every verb except for two: “USE” and “EXAMINE”. You can discourage a dumb try-fail-repeat approach by having too many objects to try every single combination of them.

The player already knows the action but there is a real-time limit on it. The limit duration is irrelevant.

If the player doesn’t know the action yet or it’s a complex chain of actions it’s not a QTE, it’s just a time constraint on a different puzzle.

Telltale games had QTEs in their dialogues: the player has a selection of phrases and, say, ten seconds to choose one of them. If the player waits, his character says nothing, which is not always the best response. The idea was adopted by some Ren'Py authors.

A great example for parser games is combat in MUDs. The player has ten seconds per turn and has to select a command. If he types nothing, he loses the turn and does nothing while his opponent acts.

Find something (in the world)

An exploration section on a world map, across several locations. The player’s goal is to find a location or something obvious in one of these locations.

You can simplify this puzzle until it becomes straightforward by providing the player with all sorts of directions. But it’s still up to them to walk the route.

This is a pacing section, where the player learns something about the world. You can show him all sorts of places while he walks, you can distract him with side quests and locations.

The player has several options to choose from. He can alternate between them. The goal is to find a rhythm.

I’ve seen a fair share of text-based rhythm puzzles used to simulate a combat: kick, dodge, retreat, rest, advance, repeat. The difficulty can be anything from casual to hardcore.

A hyperlink interface can tempt the player to mash the controls, click everything, hoping for something. This is a gameplay style. You can discourage but you shouldn’t forbid it. The player that chooses to hit every button violently is not the same person who wants to slowly read every word.

Find something (in this room)

The player is in a room. He must find something hidden here.

Lime Ergot is a perfect example of this puzzle type.

The player does not learn something about the world, he learns about this room. The exploration is more focused, it can be a character study.

It’s when the player examines a locked chest and suddenly sees a Tetromino puzzle instead of a regular lock. There might be a story reason for that but the plot doesn’t move while you’re sliding the Tetromino pieces. Another example would be a combat minigame, which rarely contains any narrative.

The player knows what to do but he must choose the moment right.

This is a turn-based QTE counterpart, but you also can pair it up with a rhythm task. Then it becomes something like turn-based Guitar Hero.

Gun Mute’s shotgun puzzle is this.

It’s a story section wrapped in a minigame. This is the real game innovation. These are extremely hard to design (compared to other examples) but so much fun to play.

If you want to make something like that I suggest you start with the gameplay, without a story for now. Just think of a fun idea, make a prototype and think what story can you tell with these mechanics.

Interactive Fiction has a serious advantage vs. visual games because reading the text is already a part of the gameplay. You can tell your story without disrupting the game flow.

A dialogue is a crucial element of IF gameplay that found its way into other game genres, most notably RPGs.

In hyperlink mode the dialogue is usually presented as a menu. Parser games also have a “keyword” mode of ASK NPC ABOUT ____. Of course, you can do a menu dialogue using some custom extensions.

The gamebook-like works usually do a dialogue tree: the player asks something, the game writes out a response and a new set of choices. A more intricate implementation is a non-linear dialogue tree, one that lets you exhaust all the options and manipulates them depending on your past choices.

The player has a number of items. He must put some (or all) of them in a combination, or an ordered sequence.

The art of crafting things, like alchemy, is usually presented as such. It’s a trial-and-error puzzle that puts its stake on the joy of discovering things. When done right, it’s an “aha” moment, or an amplified stream of these moments.

In point-and-click games, this can degenerate to a “pixel hunt”.

In hyperlink games this is a “find a non-styled link” puzzle.

The parser games are definitely notorious for this because they often expect the player to spot every significant noun in every room description.

Besides using this to hide something in plain sight, it can be a pacing tool too. It’s an exercize of reading, a perfect “STOP” sign for the folks who rush through the text.

Amusingly, it’s a rare puzzle type that can invoke itself by accident, when your descriptions are not clear enough or your links are not obviously highlighted.

So, these are all I could think of.

Can you name any more? Know any game that really pushed the boundaries? Look below for the comment section, and thank you for reading all this.

A game where you shoot things

I made a game! And you can play it now! But first I will talk about why you should.…

This Monday I released a game called “Black Phone”. It was submitted for a LocusJam, a jam about locations.…