Today I’m going to tell you about a fresh social network for gamebooks I found. A website which allegedly got one million views just in its first week after the public release.

This is StoryMaze, a fresh startup with over 100,000 subscribers in its Vk.com group. That’s about one thousand times the size of the whole Russian IF community as of today, and I’m being rather generous about the size of the latter. 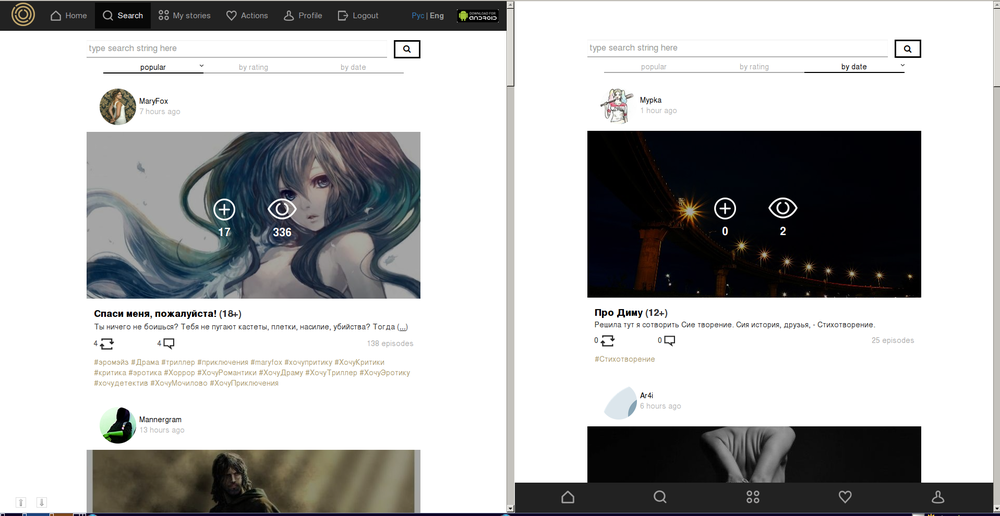 It opened in December 2015, and no one in the community knew about it until yesterday. They got about 450 games in December and 700 releases in January, judging by their JSON API. (As opposed to about 100 works in whole 2015 year for Russian IF) The release rate is about one title per hour or faster, depending on the time of the day. That’s some massive underground alternate interactive fiction.

That’s not the first IF startup to make a stir. You might be familiar with AXMA, they had a good engine and a serious online game catalogue. Their online library (Hyperbook) has nine published works since the New Year, which is perfectly normal for a single-platform Russian IF website. But Axma at least allows the author to make an offline game. The online-only projects (the direct Storymaze competition) are doing much, much worse. Quester has a virus on their front page and is almost dead, while Apero, which opened in January 2015, had their last new game in November.

Gamebooks weren’t marketed in Russia much. The first Russian “choose-adventure-path” was written in 1991 and the popularity peak dwindled by the new millenium. The last mass-market books came out in 2006, a “Give Yourself Goosebumps” series translation; by that time, kids were playing TES: Oblivion. However, the community is still alive and there is a print-by-demand publisher.

So, why is Storymaze so big and unnaturally healthy? Well, that’s the thing: StoryMaze are not IFers or gamedevs. I think they are social media people. They did not push through the IF community, they ignored RuComp (KRIL) completely. As far as I could gather, they had four vectors of promotion:

This is all my speculation, I have no info on who these people are or what they are doing but I’m amazed. I’m stupefied. This is booming right now like nothing ever before. Let’s scrutinize the service closely, shall we?

Remember the social aspect of Fallen London? The bit where you could “invite” your pal to do a quest together and forget about that. Well, by contrast, Storymaze is like an IF Twitter, with all the social bits polished for the audience. Look at that: 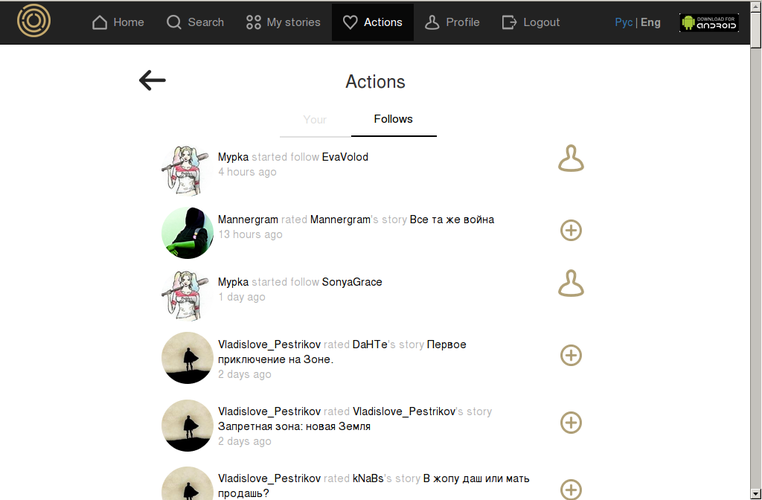 The audience is 100% Russian right now but they do have an English interface version.

Their engine is very plain: a work is divided into storylets named “episodes”. That’s right, the phrase “This game has 200 episodes” has a new meaning now. I told you I don’t think these people are familiar with IF. Anyway, each storylet has three options to end with: an ending, a single choice or a double choice. 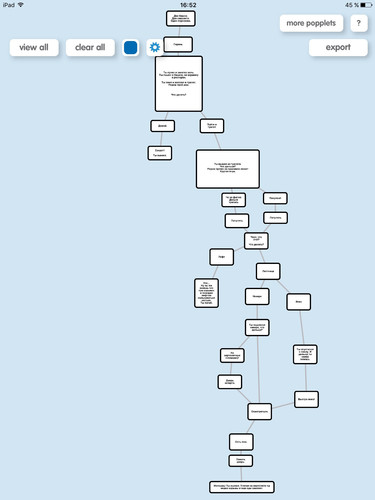 A graph shared by A.Rechkin. I took out the name of his game.

That’s all, no more than two choices per passage. No variables or state tracking whatsoever. A pure CYOA style. Some authors are brave enough to do RPGs with that, all races, classes and inventory (“do you want to be an elf or.. something else?”), and it involves a lot of copypasting, but most gamebook innovations are left untouched. The experienced authors have to use some external graph app to plot their games.

Storymaze has no pre-moderation, no rules on copyright infringement, illustration credit or questionable content (except for the content warnings). In fact, I did mention they pushed for fanfiction. Encouraged it. The rate of releases is so high they have “Game of the Day” awards (promotional post on the community wall, guaranteed to bring in several hundred players by the next day). Also, there are weekly genre picks.

The work quality surprised me for being rather decent. I don’t mean the authors there don’t suffer from a typical graphomania, but they are rooting out the typos and their games do have some plots. It is a problem when a writing service invites too much amateur writers, illiterate schoolboys and acquires a poor notoriety for being a garbage dump. The admins are prolific at writing too, though their mazes are not error-free. There is no editor-in-chief or the sort.

The official press contact page says Storymaze was founded on fourth October 2015, the site was started on 1st December and by the first week they already had over than one million views.

The players are very active, commenting on and sharing the works, using the hashtags and likes, writing and discussing walkthroughs. The voiced portion of them demands more choices per text, more text per game - the usual. (I wonder what they would say about ChoiceScript titles, if they could play them.) The comments can be used for reviews but there is no rating system except for the likes.

The authors have no analytics access but the admins do; the site has Yandex.Metrika installed with Webvisor (tracks mouse movement) and clickmap (tracks clicks). It should be possible for them to get a chart down by every storylet, as they all do have a different static URL disguised as an HTML page. They don’t acknowledge that feature.

The website is a bit glitchy and still too fresh from the oven. The text editor has no autosave, the image uploading can choke on huge files, the registration did a weird number on me until I switched to Chromium and there are your friendly minor bugs here and there. The search is very clunky, with the infinite scrolling as your only option for browsing old works (as in, older than one week). I sniffed out their API and did a rough count on the games, which you saw earlier.

There is no monetization scheme yet, all games are free to write or to play. The site is not a standalone project, as all the information and communication goes on in the Vk.com group. They also have two additional groups for writing advice and best game picks. There is a Facebook group too, but it’s not very active and does not get a mention in the Android app.

That was our local dark horse. It is something right now, it could be anything by the next month, and it’s anyone’s guess what they would do when they discover our community. In any case, we will definitely learn something new by that time.

This Monday I released a game called “Black Phone”. It was submitted for a LocusJam, a jam about locations.…

The code of Duel

A flashy amusement for some, or a serious manner to resolve a dispute for others, an IF duel is…