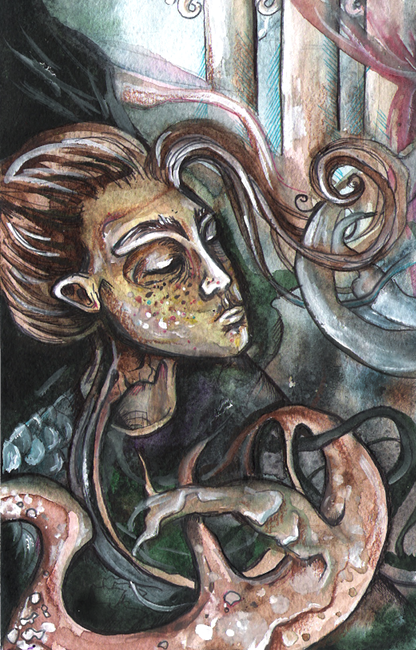 Well, you probably know this game. The foyer of an elegant opera house, the cloak. It’s a tiny “Hello, world!” of IF.

I made a new version of “Cloak” in my Salet engine. It’s a hybrid take on a familiar game: there are verbs and objects but there is no parser. You can even lose the game, which is rare for non-parser versions.

The game is bilingual (English and Russian) and it has a cool cover image (the artist is Maria Filippova).

The game should work in any browser issued in 2015 or later.

It’s an engine demo, so it’s appropriate to talk about the engine for a bit.

Salet is going great. I just updated the code with TypeScript definitions (written by @hogart) and source maps. The current version is 1.8.4 and the changelog (link in Russian) is long.

I found that it’s published on a CDN so you can use it even without installing.

The API is fairly stable around the CYOA needs but this game and the feedback from other authors showed me that the world model can be improved. The verb model in the source code from Cloak is just a small step in making a better universal system. I encourage readers to read and comment on what could be the future default behaviour.

The progress on Salet

It’s been almost a year since I started working on Salet, and I think it’s time to tell about…

Minor spoilers. Ignore the game title. It’s awful and doesn’t have much in common with the game. In the…